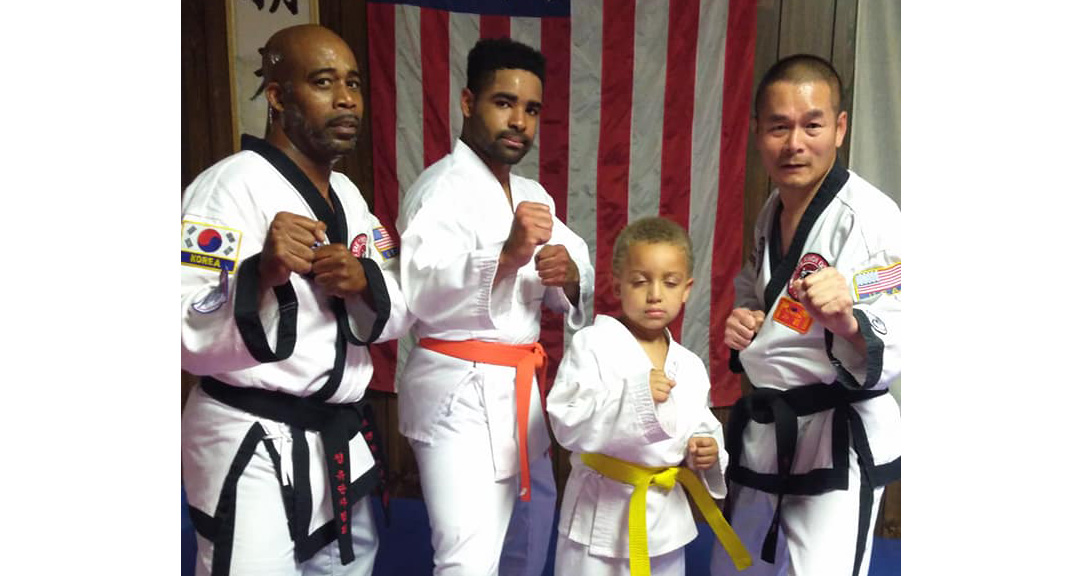 (19 movements) Chon-Ji means literally “Heaven and Earth”, and is in the Orient interpreted as the creation of the world and the beginning of human history. Therefore it is the initial pattern learned by the beginner. Their pattern consists of two parts – one to represent Heaven, the other, the Earth.

(21 movements) Named after the Holy Dan-Gun, the legendary founder of Korea in the year of 2333 B.C.

(24 movements) The pseudonym of the patriot Ahn Chang Ho (1876-1938) who devoted his life to furthering the education of Korea and its independent movement.

(28 movements) Won-Hyo was the noted monk who introduced Buddhism to the Silla Dynasty in the year of 686 A.D.

(38 movements) Yul-Gok is the pseudonym of the great philosopher Yi I(1536-1584 A.D.) nicknamed the “Confucius of Korea”. The 38 movements of this pattern refer to his birthplace on the 38th parallel and the diagram represents scholar.

(32 movements) Chung-Gun is named after the patriot An-Chung Gun who assassinated Hiro Bumi Ito, the first Japanese governor-general of Korea, known as the man who played the leading part in the Korea-Japan merger. The thirty-two movements in this pattern represent Mr. An’s age when he was executed at Lui-Shung prison in 1910.

(37 movements) Toi-Gye is the pen name of the noted scholar Yi Hwang(16th cent. A.D.) an authority on Neo-confucianism. The 37 movements of this pattern refer to his birthplace on the 37th parallel and the diagram represents scholar.

(29 movements) Hwa-Rang is named after the Hwarangdo youth group which originated in the Silla Dynasty around 620 A.D. This group eventually became the driving force in the unification of the three kingdoms of Korea. (Silla, Koguryo and Baek Je)

(30 Movements) Chung-Mu is the name given to the great Admiral Yi Sun Sin of the Yi Dynasty. He was reputed to have invented the first armored battleship (kobukson) which was the precursor of the present day submarine in 1592 A.D. The reason this pattern finishes with a left hand attack is to symbolize his regrettable death, having no chance to show his loyalty to the king.

(39 movements) KWANG–GAE is named after the famous Kwang–Gae-Toh-Wang, the 19th King of the Koguryo Dynasty, who regained all the lost territories including the greater part of Manchuria. The diagram represents the expansion and recovery of lost territory. The 39 movements refer to the first two figures of 391 A.D., the year he came to the throne

(36 movements) Po-Eun is the pseudonym of a loyal subject Choong Mong-Chu (1400) who was a famous poet and whose poem “I would not serve a second master though I might be crucified a hundred times” is known to every Korean.He was also a pioneer in the field of physics. The diagram ( – ) represents his unerring loyalty to the king and country towards the end of the Koryo Dynasty.

(44 movements) The pattern Gye-Baek is named after Gae-Baek, a great general in the Baek Je Dynasty (660 A.D.). The diagram ( I ) represents his severe and strict military discipline.

20 Movements Heaven: The first form represents the greatness of heaven and light. This form is powerful and aggressive and should be considered the source of creation.

28 movements Thunder: The fourth form represents thunder (noise without substance) which is a powerful natural source that comes from the sky and is absorbed by the earth. This form should be performed with bravery and courage. This form contains movements that display calm composure and strong balance such as blocks in combination with strikes and front kicks that require you to use force but immediately recover into a back stance, the way a passing thunderstorm nourishes the earth.

37 movements Wind: The fifth palgwe form represents wind (substance without noise) which is a gentle force that can change directions and become destructive without warning. This form should be performed with movements that change from gentle to violent. The movements of this form are yielding yet penetrating, soothing yet destructive, invisible yet manifest. This form represents a humble state of mind which balances the contrasting elements of the wind, gentleness and power.

29 Movements Water: The sixth form represents the liquidity and formlessness of water. Water flows around and absorbs things. It never loses its form. This teaches us that hardships and difficulties can be overcome by maintaining the natural flow, movement and integrity of water. This set of movements should be performed as though every action is exactly what is called for to overcome a situation at a particular moment in time.

29 Movements Mountain: The seventh form symbolizes the immovable mountain. This form is characterized by stability in which moving and stopping occur at the appropriate times and for the appropriate reasons. This pattern reflects the need to combine movement and non-movement in response to an attack. The stability of a mountain comes from structural soundness and a form that is noble and majestic.

(30 movements) Koryo was a korean dynasty that lasted 457 years, from 935 AD through 1392 AD (between the silla and yi dynasties). The name of Korea is derived from the word Koryo. During the Koryo Dynasty, Korea had to defend its borders. Despite the turbulance, culture was. a high priority during the Koryo Dynasty. Beacause the Koryo Dynasty was constantly at war but able to thrive culturally, the form Koryo, represents the cultivation of a strong conviction and an unrelenting spirit.